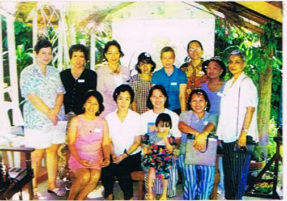 Established in 28 August 1997 by the late Rosa Francia-Meneses, the Philippine Breast Cancer Network is the country's leading not-for-profit volunteer service network focused on identifying the environmental causes of breast cancer for the prevention, early intervention and ultimate eradication of the disease.  The PBCN carries the voices of people affected by breast cancer to inspire and compel the changes necessary to end the breast cancer epidemic.

Less than 10 percent of breast cancers are genetic, and science increasingly points to environmental factors in the sharp rise of breast cancer incidence. For this reason, the PBCN has adopted the bold mission to eliminate the environmental causes of the disease, including toxic chemicals and radiation. Through public education, trainings, policy initiatives, outdoor challenges and other innovative campaigns, the PBCN mobilizes the public to secure the changes needed to stop this devastating epidemic.

In response to the public health crisis of breast cancer, the PBCN with valuable and reliable information from The Breast Cancer Fund and Breast Cancer Action (both from the USA) identifies – and advocates for elimination of – the environmental and other preventable causes of the disease. The PBCN works from the knowledge that breast cancer is not simply a personal tragedy, but a public health priority that demands action from all.

The PBCN advocates for policy changes in three areas:

1. Intervention - by shifting the balance of information away from the pharmaceutical industry and towards the public interest
while advocating for safe and effective treatments that are non-toxic and non-invasive.

3. Inequities      - by creating awareness that it is less than 10% genetics, but social, political and economic injustices and inequities
that lead to disparities in breast cancer outcomes. 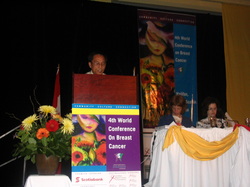 World Conferences on Breast Cancer
The PBCN participated in Kingston, in Ontario (1997), in Brussels (1999), in Ottawa (1999), Victoria, B.C. (2002) and in Halifax (2005). Rosa Francia-Meneses was a keynote plenary speaker in the Brussels and Ottawa Conferences in 1999 while Danny Meneses was a keynote plenary speaker in the 2005 Halifax Conference. The strong linkage with the leading breast cancer activist organizations in North America has strengthened the PBCN's advocacy and has given respect and recognition for the PBCN.

Philippine Conferences on Breast Cancer
A succession of three conferences were held in 1998, 1999 and 2000 - all at Miriam College in Loyola Heights, Quezon City. The 1st was a year after the PBCN was established with the presence of Andrea Martin from San Francisco USA, Kimiko Goldberg from Tokyo, Japan and Cindy Termorhouzen, representing Akiko Domoto of the Japanese Parliament. The 2nd was upon the return of Rosa from the Ottawa World Conference and the 3rd was after Rosa's passage. 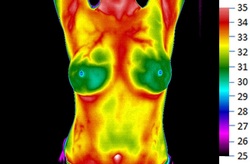 Thermal Breast Imaging
Of 443 women who underwent this procedure in a span of 10 years, 80% were not medically diagnosed but had breast concerns, majority of whom were below 45 years old. All were spared the ill-effects of radiation from mammography as 40% were found to be normal while the rest who had abnormal findings had the option of early intervention - not waiting for a malignancy before action is taken.  Take contact with the PBCN for this safe & reliable screening. 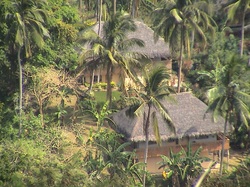 Tiaong Breast Haven
Inaugurated on 23 September 2002, this facility was built mostly on funds raised by the ABS-CBN Telethons for the PBCN. Though more women from all over the country would have benefited from the haven,  the land owner refused the continued presence of the PBCN for his own benefit. On March 2012, the PBCN vacated the premises but no matter, the many lives uplifted and transformed outweighs the material loss.  So much was learned in the confronting the disease and which has now become the cornerstone of the PBCN's protocol. 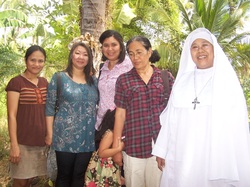 Detox Protocol
In a span of ten years, 60% of the 255 women who underwent the protocol were not medically diagnosed but had breast concerns. Majority were below 45 years old, from Metro Manila, of middle income and with college education. Only 30% were able to have a repeat thermal and 60% of them had reduced heat. Among the other 70%, half  felt much better. In conventional breast cancer treatments (surgery, chemo and radiation), patients take a passive role and their most active part would be enduring IV infusion or swallowing pills.  What is of significance in the PBCN Protocol is that women are empowered to take charge of their health as well as that of their families - knowing how to manage their individual breast concerns. 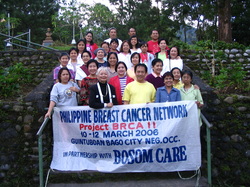 Project BRCA's -  an Innovative Training Course for Breast Cancer Wariors
With funding from The Ford Foundation and The Ayala USA Foundation, a total of 11 Project BRCA's were held from October 2002 until March 2006.  All were held at Tiaong Breast Haven except for BRCA 8 in Zamboanga City and BRCA 11 in Bago City, Negros Occidental.  A total of 130 women benefited from the intensive 4-day training course where they learned to understand the environmental causes and risk factors of breast cancer. Each became armed with tremendous knowledge in their respective battles with breast cancer. 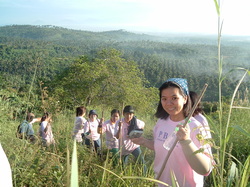 Climb Against the Odds
Instead of walking/running in polluted streets in the cities or rowing in the contaminated waters of Manila Bay, PBCN breast cancer warriors climb mountains. Without exception, it was the very first time for each and very far from their minds did they think they could do it. But climb to the top they all did - step by step with clear skies and exhilarating air lifting them up. There was no need for media coverage for they climbed for themselves, not to be used for product promotions but to make a difference in the battle with breast cancer. 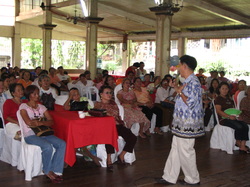 Breast Cancer Prevention Symposiums
The PBCN has been invited to conduct symposiums by various sectors of society all over the archipelago. More than a hundred have been conducted from as far north as La Trinidad, Benguet to as far south as Zamboanga City. Designed for all women at large, focus is on how to avoid the disease by understanding the environmental causes and risk factors of breast cancer. Also discussed are the safety and reliability of the various methods of detection. After the open forum, individual concerns are taken up privately. 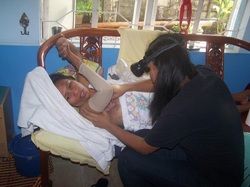 Breast Cancer Home Management Program
Now without a permanent place for women to address their respective cases, the PBCN has embarked on going to the patient's home when feasible. This program is particularly beneficial for advanced cases as well as cases where the patient desires to undertake the protocol in her own home.  The objective is to administer direct intervention as well as train family members on how to assist and support their loved one in coping with breast cancer. Since this started in 2012, patients from Cavite, Lipa, Los Banos, Lucena, Manila, Nueva Ecija and Sorsogon have availed of this program. 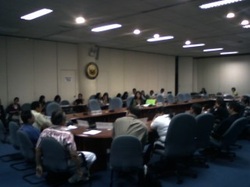 Legislative Public Hearings
The PBCN has attended public hearings in connection with proposed bills on breast cancer in Congress and in the Senate.  In all hearings, printed statements on the prevailing situation of breast cancer in the country with recommendations on what can be done were submitted and circulated by the PBCN.  With all proposed bills focused on providing free mammography nationwide, the PBCN had always firmly stated that mammography is not the answer to the epidemic as it is only a method of detection and not a preventive measure. Furthermore, radiation from mammography can cause breast cancer.